4 Different Kinds Of Poisons Your Drinking Water Can Do Without

Algae, Bacteria, and Viruses are the least of your worries… 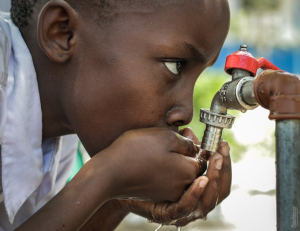 Don’t stress! As shocking as so of these facts are, the problem’s fixed with a quick trip to your local store… water filtration is cheap and easy!

But at what cost?

Water fluoridation in the United States (and other developed countries) is a prickly issue. As of May 2000, 42 of the 50 largest American cities fluoridate their water.

Population based studies strongly suggest that over exposure to fluoride can cause uterine cancer and bladder cancer.

Scientists argue that once water is fluoridated, it is difficult to limit excessive dosages… this is because people drink different amounts of water. For instance, manual laborers, athletes, sauna enthusiasts, dieters, and so forth, consume a  much higher amount of water compared to other people… those who are at risk, are people who drink water from the faucet.

Fluoride is an essential trace element for the human body; however, exposure to high amounts of fluoride has been documented to an increased risk of hair loss.

Coupled with the fact that 99% of toothpaste comes fluorinated, it makes you wonder why water fluoridation hasn’t been banned yet.

Water quality experts and environmental advocates are increasingly concerned about chemical pollution from drugs that get into lakes, rivers, and streams.

How bad is the problem?

A study conducted by the U.S. Geological Survey in 1999 and 2000 found measurable amounts of one or more medications in 80% of the water samples drawn from a network of 139 streams in 30 states. The drugs identified included a witches’ brew of drugs and chemicals such as:

Scores of studies have been done since in other developed countries, with the similar results.

Some may joke that “with all these drugs in the waterways, you won’t have to worry about high blood pressure or depression”… but different drugs affect different people… and when they’re not controlled, the results can be a ticking timebomb.

Chlorine Can Cause Obesity

A healthy person has around 4000 different species of beneficial bacteria living in their intestines. This good bacteria is responsible for maintaining a long list of body functions… such as weight maintenance, energy production, kidney health, liver health, hormone production, and immune system regulation.

Lead is a metal often used in metal alloys or chemicals, such as pipes, the manufacturing of paints, putties, and pesticides.

Scientists and the EPA agree that there’s no safe exposure level to lead.

The most common way lead gets into your drinking water is through the corrosion of pipes or plumbing fixtures. Older homes (built in the 1930s or before) are often equipped with copper plumbing systems that are prone to corrosion, so this is most likely to occur in older homes. New rules created for developers and homeowners in 1966 restricted the threat of lead in drinking water, though it was still used in plumbing materials until the 1980s.

Lead can also get into your water source when natural deposits erode into it or when industrial activity leaks it directly into water systems.

A recent study tested drinking water throughout the US. Drinking water from 118 of the 120 locations tested had levels of arsenic above the recommended maximum.

Long-term exposure to low levels of arsenic in drinking water is known to cause human health problems including cancer, thickening and discoloration of the skin, problems with blood vessels, high blood pressure, heart disease, nerve effects including numbness and/or pain, and interference with some important cell functions.

Cadmium usually makes its way into our water through impurities in the zinc of galvanized pipes and solders in fittings, water heaters, water coolers, and taps.

Short-term exposure to this heavy metal can cause nausea and vomiting, but more serious overexposure can lead to cancer as well as kidney, liver, and musculoskeletal damage.

I’ve Been Drinking Tap Water All My Life… Why Bother Filtering Now?

Even more reason to filter your water! Think of it like this: If you had an old reliable car… and learned that the oil you were using is slowly killing your engine, you’d switch brands straight away!

So why not your precious body?

Check out your local store now, and you’ll find some great cost-effective solutions!