Many of us are torn between eating sensibly and “letting our hair down” and simply enjoying ourselves.

Most of us throw caution to the wind with the mindset “I’ll work the weight-off after the new year”. Although a good intention – but for many, the weight stays with us.

But you can have a good time celebrating the holiday season without the weight gain – all while enjoying yourself with festive eating and drinking.

You just need to employ these savvy holiday season hacks. 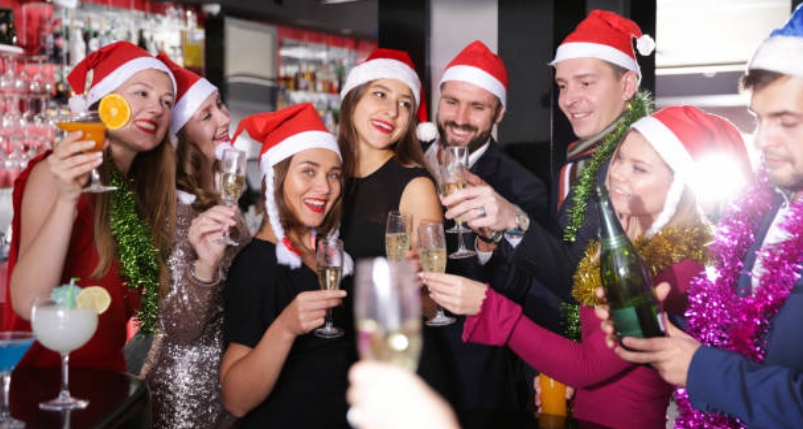 A night out drinking can cost you a shocking 1,000 calories in alcohol alone (on average). So it’s important to be savvy with your choice of drinks.

Most mixers are where all your calories are… so stay away from fruit juice and syrups.

Obviously, soda is full of sugar too… and yes, diet soda is bad for you, but diet soda is the best of a bad bunch as far as calories go.

Vodka (one shot) has 96 calories – Best drink: Vodka soda water (with a wedge of lime).

White Rum (one shot) has 96 calories – Best drink: Rum and diet coke (with a wedge of lime).

Gin (one shot) has 110 calories – Best drink: Gin Martini (not gin and tonic… tonic is full of calories).

Low carb beer – One bottle contains roughly 75-100 calories (not a great option because beer is lower in alcohol than champagne and wine – meaning you’ll tend to drink more beer).

2. Intermittent fasting before a day of festive eating

Breakfast isn’t the most important meal of the day. It’s a B.S. marketing slogan that the breakfast industry created to get you to buy their products.

It’s a controversial topic… some dietitians swear you need breakfast. But the clinical research supporting intermittent fasting can’t be ignored. Intermittent fasting is not only great for weight loss but it’s also highly beneficial for your health.

Your average breakfast contains around 500 – 800 calories. So by skipping breakfast before a day of festive eating, you’ve given yourself a good calorie deficit to start with.

3. Supplements to decrease your insulin resistance

Insulin resistance is what causes weight gain. The more insulin resistant we become, the easier it is to gain weight… and the closer we creep towards diabetes.

When we were young, our bodies were highly sensitive to insulin… thus the reason we could eat a whole pizza before bedtime and not put on any weight.

Chromium – Chromium picolinate, specifically, has been shown to reduce insulin resistance and to help reduce the risk of cardiovascular disease and type 2 diabetes.

Berberine – Berberine has been proven to lower blood sugar, increase insulin sensitivity and improve heart health, to name a few.

4. Get some exercise out of the way in the morning

If you’re in the festive spirit, chances are that you can’t be bothered doing any exercise… but dragging yourself to the gym and putting in minimal effort is better than not going at all.

Get your exercise out of the way first thing in the morning… the longer you put it off, the less chance you have of going.

5. You don’t have to finish everything on your plate!

Most of us were brought-up being told to finish everything on our plate. We were told that wasting food is wrong and we should “think of the starving children in poor parts of the world who would be upset to see us waste our dinner”.

Although we shouldn’t waste food, we also shouldn’t force food down in order to “finish our plate”.

It sounds like silly advice to tell people they don’t have to finish their plate… but these habits are deep rooted. You probably don’t even realize you’re doing it. I know I’ve caught myself finishing my plate when I was full… it’s something we were taught from a young age which makes it a hard habit to break.

6. Opt for small servings – with the option to go back for a second helping

When we’re hungry, its easy to have “eyes bigger than our stomach”.

When you combine this with the habit of “finishing everything on our plate”, you’re going to end up overeating.

Instead, go for smaller servings while telling yourself “I can always go back for more later”. This takes away the anxiety of going hungry. Once you’ve finished eating, wait 10-15 minutes before going for seconds… this gives your stomach time to tell your brain if your full or not. Usually, after 10-15 minutes you probably won’t want that second helping.

If you’re going to eat a high calorie feast, its better to eat natural than processed.

Natural high calorie foods are high in minerals and vitamins… but processed foods are void of any nutritional value.

That means eating nuts instead of chips.

Eating strawberries and cream instead of pudding and ice-cream.

Making gravy from scratch rather than packet gravy.

Soda water is a great way to hydrate while maintaining a party spirit. You can add a wedge of lime, lemon or a ribbon of cucumber to give your drink a more festive feel.

Whats more, the bubbles give you a full feeling which reduces snacking.

Drinking soda water in between alcoholic beverages is also a great way to reduce a hangover.

9. Bush your teeth just before you head out (it will curb your snacking at the party)

Rather than reaching for a handful of chips… instead, opt for nuts.

In general, nuts are good sources of healthy fats, fiber, protein, vitamins and minerals, including magnesium and vitamin E.

Pistachio nuts are a particularly good option because they’re among the lowest in calories and highest in fiber and full of antioxidants.

But pistachios best draw card is that you can’t shovel them into your mouth like other nuts. Instead, you have to take them out of their shell – one by one, which really slows your snacking down.

11. Dips with carrots and celery

With a little pre-planning, bring a container of carrot and celery sticks to your Christmas family outing.

Yes, the dip is probably not very healthy… But that’s whats going to make your carrots and celery taste great! Keep reminding yourself “at least I’m not eating chips and crackers”.

For some of us, the festive season means eating a lot of chocolate. But you can reduce your guilt and your waistline by choosing to eat chocolate the right way.

– Dip strawberries in sugar-free chocolate or dark chocolate (this reduces your chocolate intake).

Lets be realistic. This is the time of the year when even the most conservative drinkers will have “one too many”.

So lets look at the best known ‘cures’ to combat a hangover.

‘Hair of the dog’ – this hangover tip has its own funny name because it works. But it only works if you have had a really big drinking session the night before.

Drinking large volumes of water before bedtime – Its commonly known that alcohol dehydrates the body.

That crashing headache we are all familiar with is a result of brain dehydration.

So in the final hours of your drinking session, begin to consume as much water as you can… especially before bedtime. This is anther great reason to drink soda water in between drinks.

Supplements that have been clinically proven to reduce hangovers

Prickly pear – Scientists have found that ingesting this particular plant extract prior to drinking cuts the risk of a severe hangover in half.

Ginger – Chinese medicine has been using ginger for over 2,000 years to settle upset stomachs. Ginger also contains just the right amount of vitamins and minerals to help treat hangovers.

Don’t beat yourself up

The festive season only comes once a year. Don’t ruin it by feeling bad because you’re overindulging.

All you can do is try your best.

Even if you employ half these festive tips, you’ll be greatly minimizing your calorie consumption – and that’s a good thing.

I’ll admit, I find it difficult to stick to NYE resolutions… unless I put some sort of plan into place (you know what they say: “A failure to plan is a plan to fail”).

Electro-acupuncture is a proven acu-therapy that successfully treats all of these conditions… the trouble is; most people are scared-off by its invasive nature.

Natural Synergy is a non-invasive alternative to electro-acupuncture… that you can easily apply at home… and it only takes 3 minutes a day.

Natural Synergy works because it applies the same principles as electro-acupuncture. But it’s been streamlined and simplified for people to use at home.

Making it the perfect strategy to be successful with your NYE health resolutions!

In case you didn’t know… Natural Synergy comes with an Iron Clad 60-day money back guarantee. If it’s not for you, I’ll refund every penny on the spot (no questions asked, no waiting period, no stress for you at all)… on top of that, you keep everything as a gesture of good will!

As you can see, I’m taking on all the risk here… theoretically, you could buy with every intention of getting your money back. But I trust you won’t do that to me ; )

Give yourself the gift of health to kick in the New Year!