HOW TO BE HAPPY

10 RULES FOR A HAPPIER AND MORE FULFILLING LIFE

Written nearly 2000 years ago by one of the greatest Caesars of all time – Marcus Aurelius. 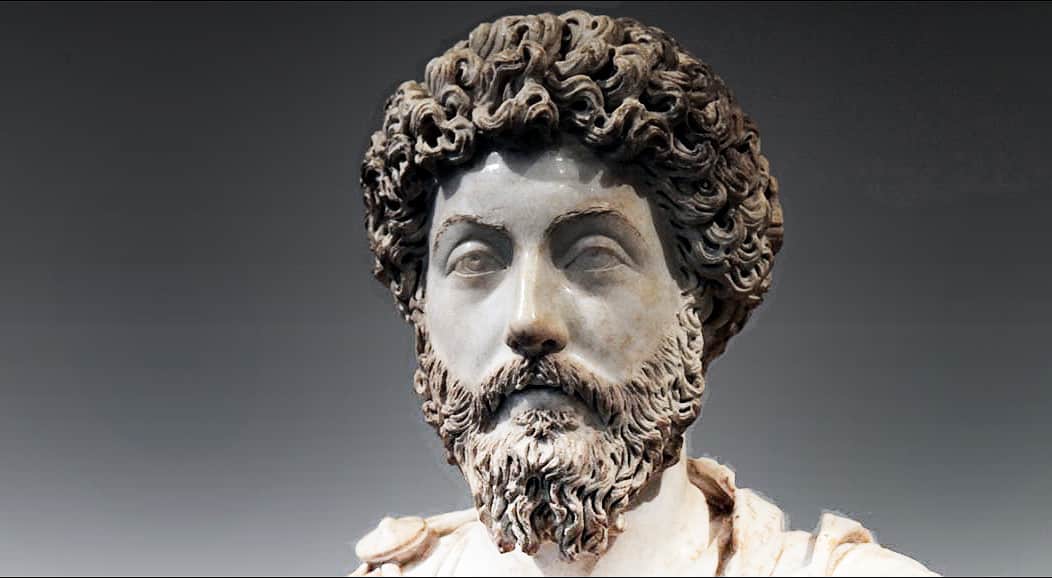 On a recent blog post, I posted a link for a free ebook. This book is the earliest ‘self help’ book ever written (other than religious test) – and in my opinion, the best help help book ever written.

Obviously, Caesar Aurelius didn’t write an ebook, but he recorded his thoughts, theories and convictions… a collection of Stoic teachings he called “Meditations”. Through the sands of time he was published, republished – and now his wisdom can be enjoyed in e-form.

If you’re like most people, you probably haven’t had the time to read it… so I took the liberty of highlighting some things that can help you start living a happier life right away.

Marcus Aurelius was a philosopher of Stoicism… a popular form of philosophy today because it reads just as true today as it did nearly 2000 years ago.

You might think that it’s “a bit rich” for a Roman Caesar to be giving out life lessons… “how could someone with a life of opulence and raw power relate to my circumstances?”

Caesar Aurelius was not only a moral man who truly cared about the welfare of his people, but he was also a very wise man, with some historians regarding Marcus Aurelius as a Seer. He was also schooled as a by two of the most famous Stoic philosophers, Seneca and Epictetus.

He also lived in an era where the harsh realities of life could easily break you. Family members often dropped dead suddenly, war and slavery was a way of life, people were slaughtered for entertainment, and the possibility of losing everything was always around the corner.

So rather than being an anxious wreck, Caesar Aurelius practised Stoicism to stay sane.

Stoicism isn’t a religion, but a way of living a happier life no matter what your situation.

Here are 10 quotes by Caesar Marcus Aurelius that will help you to become a happier person, no matter your circumstances.

1. Ignore what others are doing

Quote from Caesar Aurelius: “Do not waste what remains of your life in speculating about your neighbors. Anything that distracts you from fidelity to the ruler within you – means a loss of opportunity for some other task.

This means, that our time is very limited so why waste our precious energy worrying about our neighbors. Why do we care about what they’re they’re up to and what they think of us?

We need to ignore it all and focus on the task at hand. What is our task? Whatever our calling is on Earth. Whether its creating art, empowering others or being a great parent.

The internet is a wonderful thing… but it is also a poisoned chalice. It shows you all the things you didn’t even know you wanted. The media constantly exposes us to the lives of the rich and famous, making us addicted to what others are doing.

We waste our mental energy comparing ourselves to others and feel frustrated and sad that we aren’t as successful.

Try to give up social media for a while. Devote all your time and energy devoted to your own needs… this will make you less envious, less jealous, and you’ll stay focused on your creative work.

It reminds me of a funny experiment where scientists gave a monkey a piece of cucumber as a reward for a task… the monkey was happy with its reward (as they like cucumber). But as soon as the monkey sees another monkey being rewarded for the same task, with a grape – it loses its mind with the injustice!

Yet if it hadn’t known that its neighbor was being ‘paid’ a grape, the monkey would have been perfectly happy.

2. Your reality is made by your own opinions

Quote from Caesar Aurelius: “Life is what you deem it, life is opinion”

A good practice is to try and see the positive in everything: if somebody is talking trash about you, rather than getting angry, you can be happy knowing that you’re not boring… that you must be an interesting person if you’re ‘living inside their head’.

It isn’t the insult that hurts us – it’s our interpretation of they’re saying that hurts us. If you interpret somebody’s opinion of us as worthless, then how can we feel hurt?

Practice trying to see a positive in everything that happens to you.

3. Death is knocking at your door

Quote from Caesar Aurelius: “Take it you have died today and your life’s story has ended, and henceforward regard what further time may be given to you as an uncovenanted surplus”

When death is knocking at our door, we don’t waste our time. We don’t sit around watching TV, or mindlessly scrolling through our phones… we rush into things that we are passionate about or that are meaningful to us. When you realize how short life really is, it gives you focus.

Live every day like it was your last… because one day it will be.

4. You’re stronger than you think

Quote from Caesar Aurelius: “How lucky I am that life has left me with no bitterness; unshaken by the present. And undismayed by the future. It could have happened to anyone, but not everyone would have emerged unembittered”.

This means your tougher than you think… you can’t stop bad things happening to you but you can change your interpretation of that situation.

5. You can live happily anywhere

Quote from Caesar Aurelius: “Let it be clear to you that the pace of green fields can always be yours, in this, that, or any other spot; and that nothing is any different here from what it would be either upon the hills, or down by the sea, or where ever else you will.”

“The grass is always greener on the other side” is an old saying that highlights the fact that no matter what we have, we always wish for something else. Wishing to be somewhere else is a common root of sadness. When we realize it’s only a mirage – we begin a positive path to happiness.

If you weren’t wishing you were living somewhere better, how much energy could you be directing into something meaningful in life? Instead of wasting your mental energy pining to be somewhere else, use that energy to direct your life towards something that makes you happy.

6. Be grateful for your blessings

Quote from Caesar Aurelius: “Recon up the blessings you do possess, and then thankfully remember how you would crave for them if they were not yours”.

No matter how wealthy and successful we get, we will never be satisfied. Happiness isn’t about having everything we’ve ever wanted, rather, happiness is about being grateful for the blessings we already have.

Count your blessings, and then vividly imagine what life would be like without them. How much would you pine for those things if you didn’t have them?

7. Seek to build your own character

Quote from Caesar Aurelius: “The mind in itself has no needs, except for those it creates”

We live in a materialistic culture. We are constantly bombarded with advertisements on the latest gadgets we need to own. When we seek happiness in the form of possessions we will never find joy. No matter what you get, you’ll always want more – a bigger house, a nicer car or more money.

When we seek fulfilment in the form of physical things we are putting our happiness in the hands of others. If we define ourselves with what we have, what would happen if it was all taken away?

Rather than seeking material wealth, we should seek to build our character. We should seek to become kind, honest and hard working… after all, our house, car and assets can quickly evaporate after an unfortunate chain of events.

The one thing that can never be taken away from us is our character. Our character is was carries and defines our life. A person can rise or fall due to the virtues of their character.

8. Stop seeking the praise of other people

Quote from Caesar Aurelius: “It doesn’t matter how a good life you’ve led, there will always be people standing around the bed who will welcome the sad event”

There is a saying: “you can’t keep everyone happy”. Whether its seeking likes on social media, or how much interest you get on dating websites… in today’s society, it seems that our happiness depends on other people.

The first thing you need to realize – no matter how hard you try, there are always going to be people who don’t like you. It might be because they are jealous of you, or because you remind them of somebody they loathe, they could be racist, sexist or simply a bitter person.

Rather than wasting your energy trying to keep everyone happy, allow yourself to be more authentic, and feel a weight being lifted off your shoulders. Who cares if somebody doesn’t approve of you? Their opinion is meaningless.

9. Focus only what you have control over and ignore the rest

Happiness is being content with the way things are and not the way you think they should be.

Quote from Caesar Aurelius: “The cucumber is bitter? Then throw it out. There are brambles in the path? Then go around them. That’s all you need to know. Nothing more.

There are only 2 things in life that we have control over… our thoughts and actions. The rest is out of our hands.

How much time and energy do we waste stressing about things that we have no control over?

Anger does have a purpose (like motivating ourselves in times of injustice), but a lot of the time such emotions serve no purpose. Take traffic for example: In a traffic jam, you can get angry and honk your horn. Or you can relax and listen to the radio. Either way, you’re stuck in the traffic jam and there is nothing you can do about it.

You can’t control other people or what they think… so stop paying so much attention to others and focus on your own life.

10. Be prepared for any outcome and act with resilience

Quote from Caesar Aurelius: “The art of living is more like wrestling than dancing, in so far that it stands ready against the accidental and the unforeseen, and is not apt to fall.”

The secret to happiness is resilience in the face of adversity and setbacks. People who thrive and flourish in life see adversity differently… and are prepared for any outcome. And most importantly, they make adjustments as setbacks happen.

When you don’t let setbacks stop you, you’re able to take small steps and move forward – regardless of fearsome resistance.

See the bright side of what’s going wrong, Look at life through the favorable lens of perspective and the moving continuum of time.

If you would like to learn more about Stoicism, check out this recent post where you can download “Meditations” by Marcus Aurelius for free, or you can listen to a recorded narration of his writings.