GAMBLING YOUR HEALTH WITH ALIEN FOOD 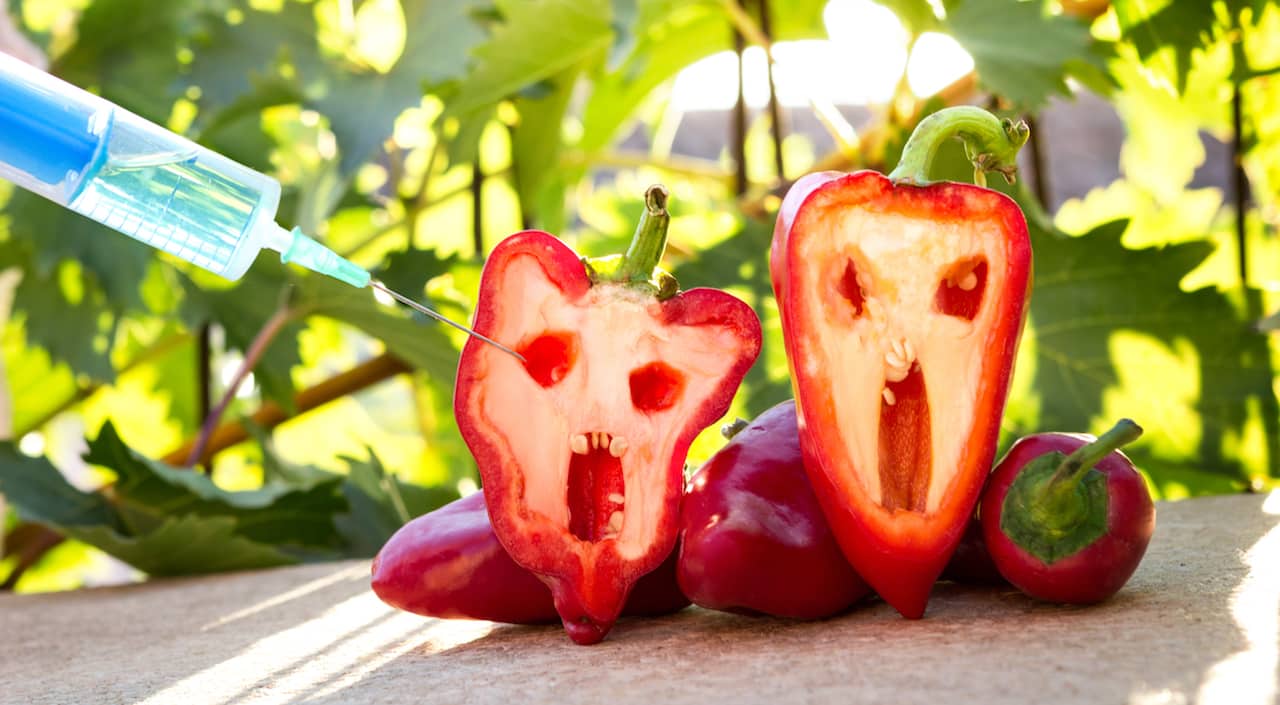 It’s about genetically modified food… and the terrible consequences it has on our health.

The documentary is an hour long, so if you don’t have time to watch it, be sure to read the brief synopsis I’ve provided for you.

Americans get sick more often than Europeans and other industrialized countries… and they are getting sicker.

Since the 90’s the number of Americans suffering from at least three chronic illnesses has nearly doubled.

There is a reason this is happening…

Over the last 20 years, we’ve seen a dramatic increase in chronic illnesses.

People are getting sicker.

One thing that’s changed; is the food. And the most dramatic change is the genetic engineering of our food supply.

“We have hundreds of millions of acres of genetically modified crops planted in the US and the public is mostly unaware” – Dennis Kucinich, US Congressman

A GMO is a genetically modified organism… Bio-engineers take genes of one species, and force it into the DNA of another species…

They have put spider genes into goats… with the intention of milking the goat to make lightweight bulletproof vests.

They have taken genes from a luminescent jellyfish and mixed it with a rabbit to create a rabbit that glows in the dark.

They have put human genes into corn – to make spermicide.

For the food we eat there are two main GMO categories:

There are the herbicide-tolerant crops, which can be sprayed with herbicide and it won’t kill the vegetables or fruit.

And the pesticide producing crops – that produce their own toxic pesticide, so when a bug bites those plants, it breaks open their stomach and kills them.

The bio-tech industry is completely swapping genes between species that would have otherwise been impossible… creating alien organisms that are not part of the evolutionary process.

The public’s perception of genetic engineering is that it’s a precise science… when in reality, these scientists are ‘shooting from the hip’.

The process of genetic engineering creates a plethora of unpredicted side effects.

Scientists take a gene and make millions of copies. They then take a ‘gun’ and shoot them into a plate of cells… typically they will add a virus to the process in order to ‘turn on’ the gene”. Finally, they then clone those cells into a plant.

The process of insertion plus cloning creates massive collateral damage… there can be hundreds or thousands of mutations up and down the chain of DNA… which creates unpredicted side effects.

This creates food where the entire gene sequence is completely alien. When ingested, the body doesn’t recognize it as food. Subsequently, the body attacks it which creates inflammation.

Most modern day diseases are caused by inflammation… particularly in the gut.

In 1996 GMO corn was introduced to the American diet. Since then, numerous stomach diseases began to skyrocket and haven’t stopped since… is this just a coincidence?

But it isn’t just gut-related diseases that have been on the rise since 1996…. Inflammation-related disease is also escalating… particularly allergies.luminescent

How GMO’s came to your table

The current FDA policy on GMO’s created in 1992 says: “the agency is not aware of any information showing GMO’s are significantly different. Therefore no safety studies are needed”.

But as it turns out in 1998 a lawsuit forced 44,000 secret internal memos into the public domain… and they showed a different story.

It became clear that the FDA had been lying repeatedly since 1992. The FDA claimed that there was an overwhelming consensus within the scientific community that GMO’s were safe… when in reality the findings were completely the opposite.

How did this happen?

The person in charge of the FDA at the time was Michael Taylor – now vice president for Monsanto (leader in the bio-tech industry).

What Monsanto wanted from the FDA was a policy that gave the illusion that GMO was being diligently tested for safety – when in reality there was zero regulation. And the FDA has pulled that off masterfully.

Monsanto – the same company that told us ‘agent orange’ and DDT was safe (and lied) wants us to take their word for it that GMO’s are safe too.

In fact, this isn’t the first time the biotech industry has had ‘their people on the inside’ to make sure their toxic products get a swift approval:

Ann Veneman (Board of Directors, Monsanto) was U.S. Secretary of Agriculture 2001 (Bush)

The American Academy of Environmental Medicine took a very strong position against GMO because the independent research they found was very disturbing.

The biotech industry does their own research… they use the wrong control group, the wrong statistics, and their feeding trial is so short, that there is no way they can detect cancers, infertility, birth defects,  or tumors… “they’ve got bad science down to a science.”

So engineers take the gene that produces the toxin and inserts it into corn to allow the plants to do the killing.

BT is used because it breaks open the stomachs of insects and kills them. It is now widely believed that BTGM corn is the reason why there has been a huge influx of stomach related diseases.

But the EPA said, “Don’t worry, BT only breaks open the stomachs of insects, and is harmless to humans and animals”… but after further testing, it turned out that the EPA got it wrong.

BT breaks open little pores in the stomach. This points a finger at the big spike in leaky gut syndrome we are seeing today.

“Since the turn of the century, I’m seeing a lot of children with leaky gut… The food they’re eating is leaking into their bloodstream, they’re creating an antibody response which causes allergies.” – Dr Michelle Perro

Common GMO crops in the U.S.

The vast majority of GMO crops are engineered to make it easier for farmers to kill weeds. For example, Monsanto’s GMO crops are able to withstand heavy applications of their weed killer roundup.

The way that it kills weeds is that it makes nutrients unavailable to the plant, weakening the plant, causing it to die from bacteria in the soil.

It’s not hard to draw a conclusion on what this does to our body over time.

In addition, the residue of the roundup can end up in our body, where it prevents nutrients from being absorbed in our stomach.

These health problems are only the tip of the iceberg…

But by being aware of the immense health problems GMO foods can cause, you can now start to read the labels of food packaging and ask your grocer or supermarket questions about the origin of their produce.

To learn more about the plethora of diseases GMO food can cause – be sure to watch this incredible documentary.